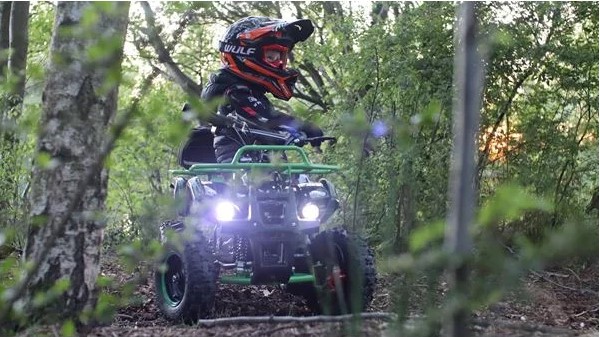 What Is A Mini Moto Quad?

A mini moto quad allows your child to experience the joy of offroading. But before we get into the nitty-gritty of our review of the best Mini Moto Quads in the market, we must first unpack what Mini Moto Quads are. There are two terms we must consider; Mini Moto and Quads.

Mini motos are smaller and step-down versions of sports motorcycles. Generally, used by children, they feature 43cc to 50cc engines that put out a respectable 20km/h to 40km/h. These speeds will provide enough entertainment and thrill to young riders without the risk of high-speed accidents.

We have reviewed some of the best mini motos in the market if you and your child prefer two wheels instead of four. Check them out here.

Quads on the other hand simply refer to the number of wheels on a mini-vehicle. Full-sized quads are all-terrain vehicles that are generally for work or transportation in rough terrain environments such as farms or mountains.

Therefore, a Mini Moto Quad is essentially a 4-wheeled all-terrain vehicle that is smaller than a typical quad. Its intended uses are for children’s recreational activities such as off-roading and or regulated racing.

Petrol mini moto quads run on, you guessed it, petrol engines. They require fuel to power a combustion engine that creates controlled explosions. The power of these explosions drives the pistons which in turn produce transfer power to the wheels, driving the mini moto quad forward.

Because these two types of mini moto quads run using different principles, there are differences in how they operate.

Generally speaking, electric motors used in vehicles employ cutting edge technology. Our state of engineering and manufacturing has not yet caught up to make electric engines for vehicles ubiquitous. Therefore, for practical use vehicles such as cars and trucks, electric motor generally is regarded as less powerful than petrol engines.

However, power is not an important consideration with regards to recreational vehicles such as mini moto quads. In fact, electric motors run on par with petrol engines in terms of performance in mini moto quads.

It would also avoid startling the livestock for those who live n rural areas. Given this, however, a petrol mini moto quad will have the hum and sound that only a petrol-powered vehicle provides. This is part of the joy that some older ATV users and consequently young mini moto quad users derive from owning quad-type vehicles.

Electric mini moto quads on the other hand need recharging to continue operation. Recharging may take up to a few hours depending on the manufacturer’s recommended charging time.

The FunBikes Ranger is a petrol-powered mini moto quad designed to be used by children of the ages 6 and up for outdoor off-roading recreational activities. It is powered by a 50cc 2 stroke – single cylinder engine which gives out an ample 29 kp/h top speed. Furthermore, it features a single forward gear and a fuel capacity of 1.0 litres.

In terms of safety, the FunBikes Ranger has a throttle restrictor to manage the speeds it gives out. It also has front and rear disc brakes which grant the user adequate braking power.

Handling the FunBikes Ranger is a breeze because it sports front and rear shock absorbers. This is great for off-roading because it gives the mini moto quad superior handling when tackling rough terrain.

One thing we like about the FunBikes Ranger is that it features a rear carry rack that allows the user to store all manners of baggage. It also has that utilitarian look that regular farm ATV’s have. With the FunBikes Ranger, your little is guaranteed to have tons of fun.

The SMC manufacturers hail from Taiwan. Because they are one of the longest established ATV manufacturers, SMC produces great mini moto quads. The SMC Cub is a mini moto quad that runs with a 50cc 2 stroke – single-cylinder engine. It also features an easy-to-use automatic transmission system that your kids will enjoy due to its ease. Due to having fully enclosed safety footwells and a lanyard engine cut-off, the SMC Cub ensures that your child will be riding safe provided that you teach your child proper and safe driving. Further, the throttle restrictor also adds to the safety of the SMC Cub.

When it comes to handling, the SMC Cub mini moto quad sports rear single shocks and a front A-arm suspension system providing smooth handling. It also has powerful rear drum brakes that increase the braking stability of the SMC Cub.

Yet another great mini moto quad from SMC, the SMC Scout is a more powerful version of the SMC Cub. It runs on a 90cc 2 stroke single-cylinder petrol engine that gives an ample amount of power in such a small package. It also features an automatic transmission system similar to the SMC Cub which also provides the same ease of use for your young adventurers. Further, in terms of safety, the SMC Scout also features the fully enclosed safety footwells present in the SMC Cub. However, one key difference this has over the SMC Cub is that it features a kickstart when turning on the power.

The SMC Scout sports the same suspension system found in the SMC Cub albeit calibrated to fit this powerful yet small package. Thus, your young one can expect the same smooth handling experience the SMC Cub provides with the SMC Scout. Further, the brakes used by the SMC Scout give ample braking power.

We like that the SMC Scout retains the plethora of features the SMC Cub has. It improves upon the power of the SMC Cub making it a great choice for young riders who are in the last step before transitioning into junior-sized off-road ATVs.

Although the Funbikes Bambino runs at slow speeds, this could actually be a potential safety feature given that fast speeds are conducive to accidents. We feel that the ample 11.2 kp/h of the Funbikes Bambino is more than enough for your young child to enjoy offroading.

A stepped-up version of the Funbikes Bambino, the FunBikes Toxic are intended for older riders who are more confident in their skills in handling faster and more powerful mini moto quads. Featuring an 800w electric motor with speeds of up to 20.9 kp/h, the FunBikes Toxic will surely give your young rider the thrill and excitement of offroading. In this stepped-up mini moto quad, a few gear options are added to its transmission namely; forward, neutral, and reverse, giving it the feeling of being an actual full-sized ATV.

In terms of safety, the FunBikes Toxic can be restricted to run in either 8.05 kp/h, 12.8 kp/h, or the full 20.9 kp/h. This allows you to have the peace of mind that being sure your child won’t exceed speed limits gives.

We like the nifty battery life gauge that the FunBikes Toxic has. It allows your child to see how much juice they have left in their battery. This helps them plan ahead regarding how long they will be riding before needing to recharge.

Handling is smooth with the FunBikes Ranger because, like the Funbikes Toxic, it sports a front twin shock and rear mono-shock suspension system. It also has the same disc brakes as well as the battery life gauge.

We like the FunBikes Ranger because of its utilitarian look. It gives the same feel as a farm ATV. The rear storage rack is also a great addition.

This mini moto quad prepares them for the more powerful ATVs that they may encounter in the future. Given the speeds that the FunBikes T-Max Roughrider can reach, the 3-speed restriction allows you to be sure that your child will not go too fast and potentially hurt themselves. It also has the 3-gear transmission options that the previous electric mini moto quads offer.

Front twin shock and rear mono-shock suspension systems are utilized in the FunBikes T-Max Roughrider as well as front and rear hydraulic disc brakes. This makes handling and braking even in rough terrains a breeze.

What age can a child ride a quad bike / mini moto quad?

Most manufacturers of quad bikes and mini moto quads specify that their vehicles are safe for children at ages 6 and up. However, some quadbikes are marketed for ages as young as 3. Generally, if your child displays responsibility and willingness to ride quads and go offroading, and as long as they meet the safety standards in place in your country, then it is safe for your child to ride a quad.

Generally speaking, if you teach your child thoroughly the proper operation and rules of driving a quad, and provide them with the proper and complete safety equipment, then it is quite safe. Furthermore, mini moto quads and children’s quad bikes come with speed limiters that can only be accessed by adults. This further minimizes the risk of injury. It is important that you teach your child the responsibility of owning and riding a quad bike/mini moto quad and emphasize the fact that these are, indeed, not toys.

What are mini quads /mini moto quads for?

Mini quads /mini moto quads are intended to be used by children and younger teens only. Mini moto quads have a weight limit with regards to the load you can place on them. Exceeding this limit for example; when a grown adult attempts to ride a mini moto quad, may not only damage the mini moto quad but cause injuries to the person.

Mini moto quads are indeed legal albeit under certain circumstances only. Most countries do not allow the use of a mini moto quad on public roads by people under the legal driving age due to it being classed as a vehicle. Again, these are not toys but actual vehicles. Generally, designated parks and/or private land with the owner’s approval can be used for riding mini moto quads.

Offroading is such an enjoyable activity. It lets you experience the thrill and excitement of being one with your vehicle and traversing rough land. It also allows you to unwind and reconnect with nature. Sharing this experience with our children is not only a great pastime but can be an opportunity to bond with them. Teach them responsibility and keep them safe in their journey towards discovering offroading!

Get the best Electric Quad Bikes for kids!

This website uses cookies to improve your experience while you navigate through the website. Out of these cookies, the cookies that are categorized as necessary are stored on your browser as they are essential for the working of basic functionalities of the website. We also use third-party cookies that help us analyze and understand how you use this website. These cookies will be stored in your browser only with your consent. You also have the option to opt-out of these cookies. But opting out of some of these cookies may have an effect on your browsing experience.
Necessary Always Enabled
Necessary cookies are absolutely essential for the website to function properly. This category only includes cookies that ensures basic functionalities and security features of the website. These cookies do not store any personal information.
Non-necessary
Any cookies that may not be particularly necessary for the website to function and is used specifically to collect user personal data via analytics, ads, other embedded contents are termed as non-necessary cookies. It is mandatory to procure user consent prior to running these cookies on your website.
SAVE & ACCEPT