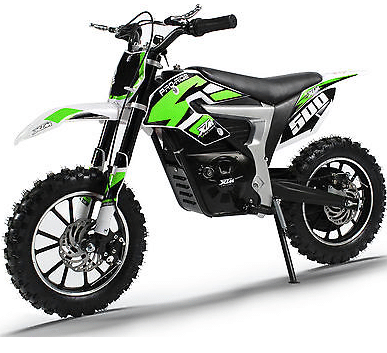 The oldest one, my daughter, rides on the fastest gear and my younger son rides on the second speed. The lowest setting in my experience is no use as it’s to slow and your child can not balance properly. 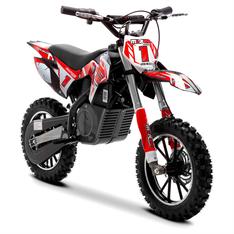 Now Before you buy an xtm 500 dirt bike its recommended that your child should be able to balance a bike before using one. As my son can ride this bike with no problems i have to push him off and stop him when he’s finished as he cannot touch the floor.

You should check if your child will be able to touch the floor before buying an xtm 500. This was something we didnt do -which became a problem given  a seat height of  57cm and handle bar height of 80cm.

The recommend weight for the rider is 60kg, this bike is great for any kids that wants a dirtbike because they won’t be causing trouble with the loud noise from a real one. This xdm 500 dirt bike comes with 10inch wheels which the tyres and inner tubes are easy to replace when needed.

Why its called XTM 500 and what are the features of the xtm electric dirt bike?

36V Lithium Batteries these are lighter than many other rechargeable batteries of a similar size. More energy can be stored meaning longer ride time than other batteries of the same size

Front and rear suspension for a smooth ride now these are not top of the range shock and forks, but they do the job as needed. Pretty comfortable to ride as i have had a little go my self

They say that the xtm dirt bike reaches speeds of up to 30kph which is around 18mph, which is fairly quick for a bike dirtbike. I would recommend starting off on the second speed for new riders which is nearly 9mph.

With a range of 16 miles per-charge which takes 4-6 hours to charge. No doubt that the 16 miles measurement is based in flat grounds. No doubt distance will change with whatever terrain your child is riding. There is Battery power Indicator on the throttle which is great so you no when to take it home to re-charge.

Overall this is a great dirt bike to go for if your buying it for a young child 5+ slow enough for learners and fast enough for kids that know how to ride. Now these kids dirt bike are quiet expensive for the average person so you maybe better off getting a second have one if you can on.

Childrenstoybox.co.uk is a participant in the Amazon EU Associates Programme, an affiliate advertising programme designed to provide a means for sites to earn advertising fees by advertising and linking to Amazon.co.uk

Any cookies that may not be particularly necessary for the website to function and is used specifically to collect user personal data via analytics, ads, other embedded contents are termed as non-necessary cookies. It is mandatory to procure user consent prior to running these cookies on your website.